Here’s the lowdown on Bosch TC10 10-Inch Wet Tile and Stone Saw. It’s a wet tile and stone saw that works superbly in cutting down various materials since it’s able to cut straight and square put it’s accurate to the last inch or centimeter as soon as you get it out of the box with little to no adjustment. What’s more, the Bosch TC10has reproducible saw settings, which mean when you’re adjusting the settings as outlined in the user manual, you won’t get an inaccurate or non-square cut. 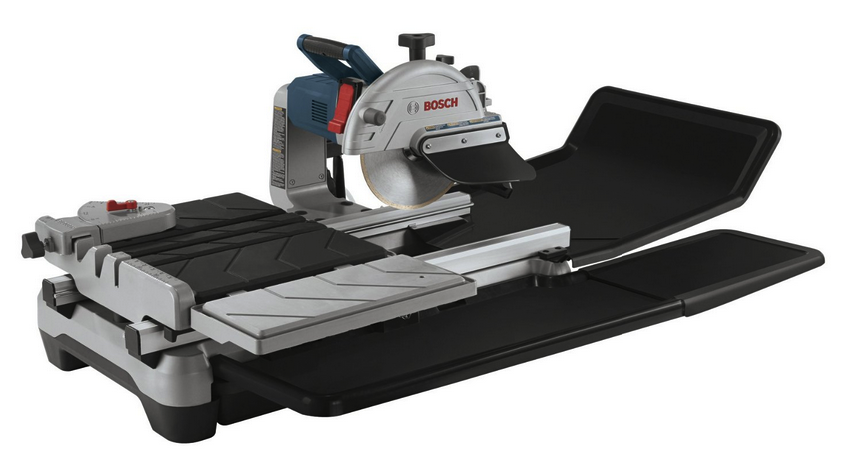 A Pricey Saw That’s Worth Every Penny

The Bosch TC10 is a pricey saw, but it’s worth every penny because it’s easy to drain and has an efficient water system that you’d expect from only the best, topnotch wet saws around. All you need to do is pull the plug and slight the pan out in order to get all that water into the bucket. Cleanup of the saw is a breeze since all the dirt and debris is washed away before it could scatter all over your workplace or damage the internal circuitry of the unit itself.

As for the saw base of the Bosch TC10 10-Inch Wet Tile and Stone Saw, it’s excellent, stable, and balanced. What that means is that when sawing stone tiles or even normal ceramic tiles without breakage, it always helps to have a steady anvil of a base to keep everything precise and squared, so you won’t have to saw them up again when they end up too big or get rid of the tile if it ends up too small. You won’t have to deal with substantial wobbling when using the steady and sharp Bosch TC10 (although in the cons section, some users would beg to differ).

Here are the specs of the Bosch TC10 10-Inch Wet Tile Saw:

While this saw is fairly heavy, I have little to no complaints about the Bosch TC10 10-Inch Wet Tile and Stone Saw. It’s because it’s not dishonest with what it can do. Its advertising and marketing is spot on. It’s a wet tile and stone saw that can cut tiles and stones with a water-cooling system that prevents its blades from wearing down due to friction and it’s about 10 inches in sizes. In fact the more I found out about the capabilities of this saw, the more I grew to love it. Although a person can lift it, it’s easier to lift with the sliding table removed.

The Bosch TC10 10-Inch Wet Tile and Stone Saw has received 15 reviews and has a 4.5 rating on Amazon.com.

The most obvious con that the Bosch TC10 10-Inch Wet Tile and Stone Saw has is its 15 reviews on Amazon.com that might skew its scores among only a few users. As for the unit itself, it does have some downsides. Some Amazonian users argue they’re serious flaws, like the rails that the table runs on are round, so they trap in chips and debris. The rollers can then get stuck on those chips. The table, some claim, isn’t as stable as advertised. It sometimes doesn’t run smoothly enough and has a tendency to bump up and down. When doing diagonal cuts, this can cause the tile to break. With that said, many other reviews encountered no such issue, so this might be a one-time fluke on a minority of users.

The design of the Bosch TC10 10-Inch Wet Tile and Stone Saw is pretty impressive, with a sliding table that’s easy to hose off and remove whenever needed, thus ensuring a clean unit when everything is said and done. Just watch out with the heaviness of the saw.What’s more, its chop saw motion works quite well even though it only has two bevel settings available (which is fine since this is the case with most other wet tile saws). Its pump also works well to make sure your water reservoir isn’t wasted and always sprays the blade to cool it down without ending up misting. What’s more, the water stays in the saw because of the aprons of the unit. Check out more best tile saw here.