The Fuji 2203G Semi-PRO2 – Gravity HVLP Spray System meets the growing demands of the DIY market by introducing its powerful two-stage system, which allows it to spray efficiently and cost-effectively like no other model within its price range. The Fuji 2203G Semi-PRO2has various professional features such as adjustable pattern size from wide to small circular as well as all in-between increments through a Fan Control Knob. It’s also a non-bleed paint spray that ensures your accuracy when you put on the spray. Meanwhile, there’s also the unit’s handy gun holder and powerful metal turbine and 2-stage, 1,400-watt bypass motor contained within a tough case. 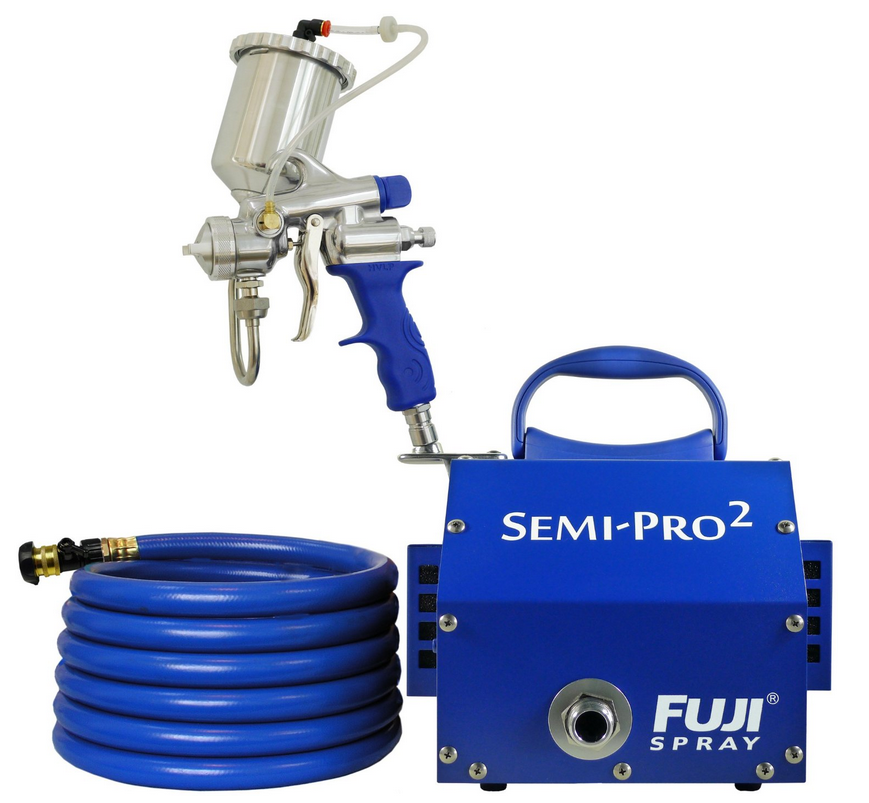 More Bang for Your Buck

You’ll get more bang for your buck with the Fuji 2203G Semi-PRO2 HVLP Spray System because even though it conserves energy when you use it, it’s not underpowered at all thanks to its two-stage turbine that can handle all sorts of coating. If you’re a serious or professional user, then the Semi-PRO 2 Gravity Model is the sprayer for you. It also gives you more value for your money because it meets the demands of the growing DIY market by being easier to handle compared to commercial-grade sprayers. It’s the consumer edition of your typical spray system, allowing even beginners and amateurs to spray down walls and decks without having to pay a professional to do it.

Professional Results Thanks to Topnotch Specs

Speaking of professionals, the results of the intuitive spray is quite professional as well. The Fuji 2203G Semi-PRO2 offers pro results because of its powerful two-stage system and its easy to control sprays that maximize every last drop of your paint. You’re protected from overspray or paint bleeding from spraying too hard or too much. Its fan control knob that adjusts spray size from big to small and its non-bleed nozzle allows you to get showroom paintjobs at a squeeze of the trigger. The knob can also shift from all increments in between small and big for various detailing jobs.

Here are the specs of the Fuji 2203G Semi-PRO2 – Gravity HVLP Spray System.

The Semi-PRO 2 Gravity model is a gun spray for the serious user or the average beginner who wants to indulge in DIY home improvement. As a weekend woodworker who also does home repairs, I have a lot of painting projects that typically involves latex and applying clear finishes. With that said, I have to say that the Fuji 2203G Semi-PRO2doesn’t disappoint when I use it for my various paintjobs. The unit itself is quite a nice device to behold and as far as HVLP systems go, it’s one of the more powerful and dependable ones in the market. I personally can’t live without it.

The Fuji 2203G Semi-PRO2 – Gravity HVLP Spray System has received 100 reviews and has a 4.7 rating on Amazon.com – at the time of this writing.

Here are the most common complaints in regards to the Fuji 2203G Semi-PRO2. Its gun has metal parts that corrode easily even though the user in question has only used the spray gun occasionally. Even though he cleans it out as much as possible, the metal on the spray is made from cheap metal, which meant he had to replace it with another spray system. There are also complaints from the spray not being able to spray urethane properly (a brush tainted the wood better than the spray). There are also complaints about it not having enough adjustment options and having little under power.

Although the Fuji 2203G Semi-PRO2 – Gravity HVLP Spray System does have several weaknesses or shortcomings, many of them are easily trumped by what it brings to the table. For most spraying applications, HVLP systems typically feature low wattage motors that are underpowered; this isn’t the case with the Fuji 2203G. It’s powerful for something in its class or type (HVLP), its knob allows for loads of control in regards to spray size and power, and it doesn’t bleed, overspray, or bounce back when it sprays out its load. Not recommended for use with urethane. You won’t have to waste paint when painting over missed spots and whatnot. It’s a great HVLP sprayer for its price and capabilities. Check out other best paint sprayer too!